Well Black Music Festival 2015 came and went under sun shine, blue skies and with the hissing of praise left ringing in our ears.
The behind the scene hustle and bustle was not reflected on the stage. 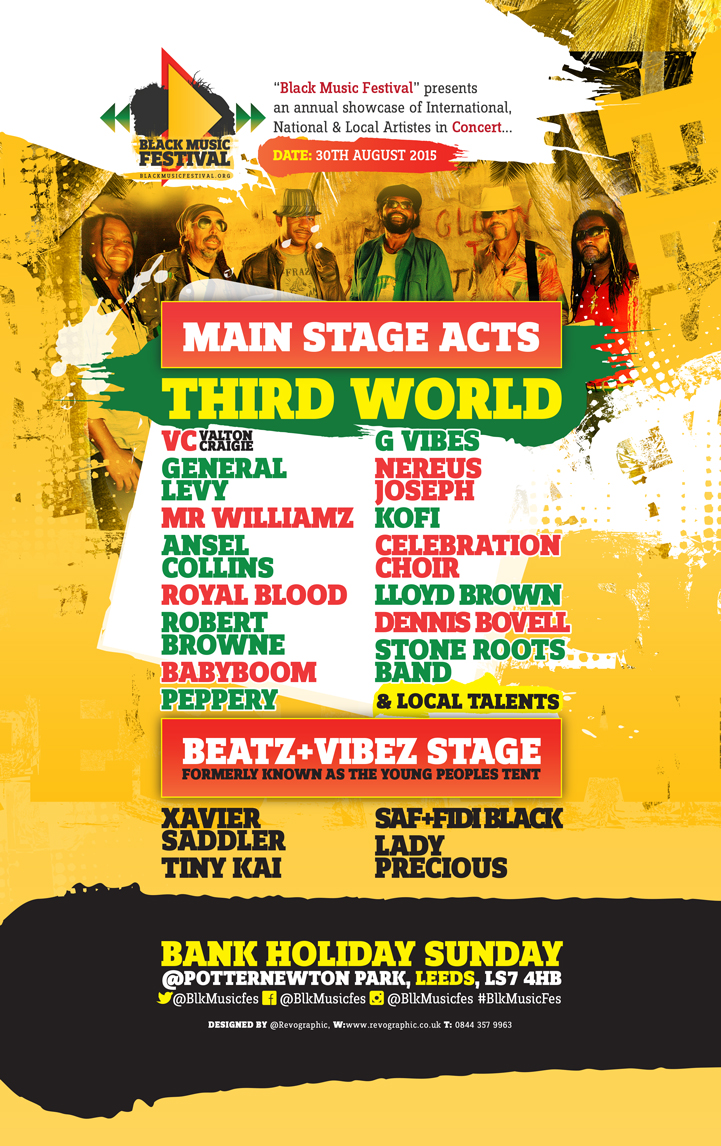 Our Headliners Third World were phenomenal and had the crowd singing along to ‘Now that we found Love’ and swaying. The first time in years have we seen so many people in Potternewton Park dancing and enjoying the music on Bank Holiday Sunday.
Many people were asked on the name change, which they accepted and appreciated it represents the music and applauded the new organisers – We Thank You!

The Wray and Nephew rum shack went down a treat, accompanied by the Carnival Survival Kit, how you possible could not have a spring in your step from that is beyond us. Wray and Nephew were back on the map for the Black Music Festival.

As for the artists, well, Kofi was exceptional as were Nereus Joseph, Lloyd Brown, Robert Brown, Dennis Bovell, Ansil Collins, G Vibes, VC all supported the positive vibez of the festival. Local Talent Empress Imani, Daniella Luca and Jerz showed how they could hold the crowd like true professionals with MC Speedo and Ras B and the Roots stood firm in their performance. We even had artists arrive on the day requesting ‘Just one slot’ as they wanted to be part of the ‘Leeds Vibez’. We have them lined up for next year #WhoopWhoop. Tubbs you are amazing!
The Beatz and Vibez stage was electric the young and young at heart were dancing up a storm, could hardly pass through. The DJ’s ensured all enjoyed and worked up a sweat.
Did we enjoy this whirlwind journey, heck yes.

Late evenings planning the operations of the day, volunteers packing giveaway bags from our sponsors Morrisons Supermarket and watching the rehearsals were all part and parcel of making the day the success it was. A newly formed team was full of enthusiasm.
Huge thank you has to be said and sent out to our partners who without them the festival could and would not have happened. It all took a multi-agency approach:
St. Johns Ambulance; West Yorkshire Police; Fire and Leeds City Council with a special mention to the Cleansing Dept who made such a fantastic job that if you drove through on Tuesday morning you wouldn’t had known what had taken place over the Bank Holiday weekend.
So revellers/supports see you next near, this year was a taste of what’s to come
Artists/Promoters get in touch if you believe you can hold the #Leeds crowd and be part of #BLKMusicFes2016!

About 5 days ago from Black Music Festival's Twitter via IFTTT

About 3 weeks ago from Black Music Festival's Twitter via IFTTT

About 3 weeks ago from Black Music Festival's Twitter via IFTTT

Our stage #BeatzNVibez was 🔥🔥🔥 with new city centre DJs from #Leeds joining us for our younger revellers on the Monday giving an alternative to the parade Each year Bigger Better #BLKMusicFest22 catering for ALL @LeedsArts @LeedsParks @LEEDS_2023 pic.twitter.com/pDGpjqoMKK